Uncle Ben’s Rice Bowls
Garlic & Herb
2.99
Ignore
I wouldn’t buy this simply because it doesn’t make sense. If you feel comfortable preparing the meat and veggies that you are buying separately, you could buy cheaper rice. Also, you probably have some sort of seasoning at home already. I would rather see rice boxes that had more unique flavors, especially for that price. Or have more unique rice blends.
Source 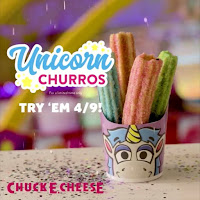 Chuck E Cheese’s Unicorn Churros
Cherry, sour apple, blue raspberry sugar.
$3.99
Ignore
I don’t want any of these flavors with fried dough. It’s too tart. I also don’t think any of these flavors would interest enough kids. They’re only available until June 6th, 2019 so time will tell if these do well. I think regular churros with the unicorn cup would sell just as well if not better. Not all kids’ food needs a “wacky” flavor. Their other desserts look a lot better and make more sense for groups
Source 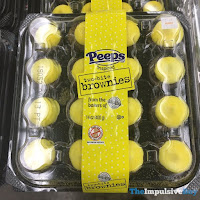 Peeps Two-Bite Brownies
$5.99
Ignore
Absolutely ridiculous. Peeps by-products are so bare minimum. Six dollars for such a small amount. You would be paying for the Peeps name. A better value would be buying a box mix and then peeps. You can bake the marshmallows on top. These could be from any brand they don’t even look like peeps. I know it is “inspired” but I think this could have been more fun.
Source

Green Goddess Tuna Melt from Subway (with TasteMade)
Tuna blend with mayo, shredded mozzarella, spinach, tomatoes, onions, and a green goddess dressing.
Price Unknown
Ignore
Subway’s tuna is premade and very mayo heavy and that’s coming from someone who thinks mayo is a better dip than ketchup. The term “tuna blend” sounds like a scam. I would not want extra sauce on top of a pile of mush. I also think the shredded mozzarella isn’t enough for a melt. Tuna melts usually have slices of cheese. I don’t think you would be able to taste the vegetables either. I think if they would prepare tuna salad fresh it would be much better. I would like to be able to control how much mayo is in it, or even have the sauce mixed in with the tuna
Source


Roast beef is a safe option at Subway. It’s not something they made somewhere. I think bacon jam is an interesting touch and not something I would expect from the subway. I’ve never had pimento cheese but I think it’s another interesting choice. I like sandwiches with dip so I would get this. Maybe do some personalizing but if it comes out nationally, I’ll go.
Picture Source
Source