A&W Okinawa Chicken Loco Moco
Fried egg over rice, crispy chicken, ravioli with demi glaze on top
¥550
Order
I’m already full just looking at this picture, I wouldn’t pair ravioli with gravy plus rice but it is just so intriguing to me. Am I missing something by not layering my carbs? Ravioli is not something I see served in the fast or casual food market. Gravy needs to be more prevalent so I support this. I have never had loco moco but I would order this. It’s a lot of food and even if I didn’t like one thing, I have four others to go to. My greedy self would try to get all the flavors in one bite. There is also a beef version.
Source 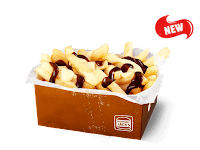 Hungry Jacks (Burger King Australia) Smoky BBQ Cheesy Loaded Chips
Fries with cheese sauce and bbq sauce
Price Unknown
Ignore
I’m using this space to be sad about using cheese sauce over melted cheese. Give me more real, melted cheese! Is it a price issue? I’m tired of the cheese from Handi Snacks being melted and put over food. I also don’t think BBQ sauce mixes well with cheese sauce, especially without either some onions or bacon on top. I also don’t like a thicker fry so I’m out.
Source 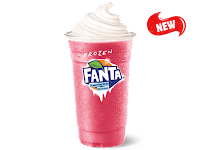 Hungry Jacks (Burger King Australia) Frozen Fanta Creaming Spider Soda
Frozen Fanta Creamy spider soda mixed with vanilla soft serve
Price Unknown
Order
From pictures I searched, this is a berry flavor, probably raspberry. I’m not sure where the name comes from or why the spider is involved but this looks good. Floats aren’t as easy to find as they used to be and fruits and vanilla goes well. I would like to see the mango one with ice cream as well.
Source

Churches Chicken Canada 8 Pepper Chicken
Price Unknown
Order
This is probably going to be so aggressively spicy that ranch won’t help but I’d order these immediately. Most peppers have some amount of heat so 8 will be blazing. If buffalo wild wings have so much success with all their sauces, why can’t American chains have more options? If the US can’t get this, can we at least have the sauce to dip? Sell a smaller size? Just give us a month to try it.
Source 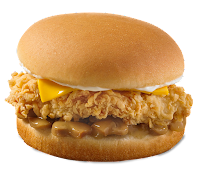 Texas Chicken (Churches Chicken) Belarus Chicken Mushroom Sandwich
Crispy chicken with mushroom gravy, cheese, and mayo
Price Unknown
Order
I can’t see any reason why US branches can’t get this mushroom gravy. We already have plain gravy so why not give us this so we can have this sandwich? Also, why can’t we have sandwiches? Just stock some rolls and mayo, I don’t even need the veggies. I want more gravy! A dipping sauce I would take as well.
Source
a&w australia bbq belarus canada chicken churches fanta fries hungry jacks okinawa pepper