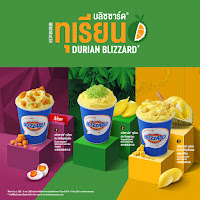 Dairy Queen Thailand Durian Blizzard
Durian blizzard with salted egg yolk crumbles
Price Unknown
Order
Travel Channel and Chopped on Food Network told me that durian has one of the worst smells of food, but I would still try this. Ice cream is so approachable so this would be a good way to get exposure to it. I am not sure what the yolk crumbs are supposed to do but the yolk is my favorite so whatever. At least there is some variety going on.
Source

Churches Chicken Mexico Lemon Pepper Tenders
Price Unknown
Order
The batter is what I’m really interested in. I really like the wet batter for chicken and it's not used enough. They look so light and crispy. I like seeing flavor in tenders, usually, it's just plain or “spicy”. There isn’t anything about the sauce mentioned but I love a dip. They look like a good portion as well.
Source

Churches Chicken Mexico Chicken Fajita Quesadilla
Price Unknown
Order
These look like more of an empanada but it’s something that isn’t seen very often on menus. I’m not sure what makes it fajita. Also, I’m not sure why sliced cheese is used over shredded. Although there is already sliced cheese in their stores because they have the luxury of having sandwiches (which in the US we don’t have but that’s another conversation).  I would like a dipping sauce with these but they look good I’m interested.
Source 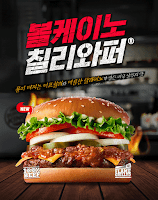 Burger King Korea Volcano Chili Wipers
Whopper with beef chili and jalapenos
Price Unknown
Order
Spicy chili on a burger sounds good. I don’t know why America doesn’t have that. I know Wendy’s has chili but it isn’t spicy and to my knowledge is not on a burger on the standard menu. This is an approachable menu item with something different. Plus the name is super cool. Sounds like a villans burger.
Source

Burger King Sweden Halloumi Fries
Battered halloumi cheese in fry form
Price Unknown
Order
Nothing to complain about here. Halloumi is a tasty cheese that is meant to be fried because it holds its texture pretty well. I’d buy these ASAP. Instead of fries with every meal or just get two orders of these. I don’t see a sauce included but that wouldn’t stop me. Looks like a good size order.
Source