Cedar Plank Lobster and Shrimp from Red Lobster
Price unknown
Order
Usually, these ingredients are involved in a big pot of broth. I like that I can get the ingredients of a seafood boil without the boil. The butter on the side is also a nice tough. The potato wedges are a new side option. I would probably request something to dip them with. I like when red lobster does this type of theme for limited time items but I do wish that some of them would be more permanent. There are two other options: the salmon and shrimp & the sirloin and shrimp.
Source 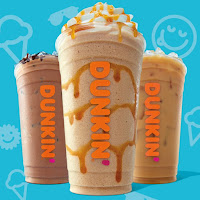 Dunkin’ 2019 Baskin-Robbins Ice Cream Flavored Coffee Pistachio Almond Fudge
Price unknown
Order
I really like flavored iced coffee. Usually its just caramel, mocha or vanilla. I like to see new fun flavors. Dunkin has reasonably priced iced coffee and I like being able to decide how much cream or sugar I want and it usually isn’t much extra if at all. What I would really like to see is Dunkin release coffee syrups in a store like they do with coffee.
Source 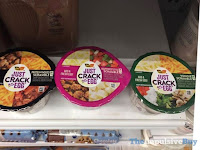 Ore-Ida Just Crack and Egg (Protein Packed Scramble, Southwest Style Scramble, and Veggie Scramble)
Price Unknown
Ignore
There are way more convenient ways to eat prepared egg meals. Jimmy Dean has some many frozen egg options that are much easier than this. Frozen eggs, especially in a bowl set are pretty good. I don’t understand the appeal of adding fresh eggs to a smaller container. If this is something you’re going to take to work, you’re taking a raw egg and this cup of veggies and or meat mix? Is one egg even enough for breakfast?
Source

Wegmans Ru’s Buffalo Chicken Pierogis
$7
Order
I don’t have a lot of experiences with perogies but I like the idea of them being fresh, not frozen. Wegmans does a good buffalo wing so I would assume that would be the sauce inside of this. It’s hard to tell how many they are for $7 however it is Wegman’s which tends to be a touch higher. There is also one with cheese and banana peppers but that doesn’t interest me as much and $7 is too high for that flavor.
Source

Subway Club Collection
Southwest Chipotle Chicken Club- Chicken strips, applewood-smoked bacon, pepper jack cheese, lettuce, tomatoes, green peppers, red onions, Chipotle Southwest sauce, and guacamole, on Jalapeno Cheddar bread.
Steak Club - Shaved steak, turkey, applewood-smoked bacon, American cheese, lettuce, tomatoes, and mayo, on Italian bread
American Club - Turkey, Black Forest ham, applewood-smoked bacon, American cheese, lettuce, tomatoes, and mayo on Artisan flatbread.
Price unknown
Ignore
How can this be limited edition if you can create these sandwiches on your own? There is not a single ingredient that is new. Not even a new version. At least with the Tastemade collaboration, there were new ingredients being tested. Subway needs to be more creative or maybe instead of wasting ad money on these types of promotions, increase the quality of ingredients. Connect with local farmers, spend more time testing new items, just something else that isn’t just using the same items.
Source