Coney Dog Egg Roll
$6.50
Hot dog slices and chili in an eggroll and fried. Mustard on top with diced onions.
Order
It’s a newer twist on the pigs in a blanket. The crispy wrapping matches well with the softer middle. I don’t think every item needs to be full force in your face extra. At least with the egg roll wrap, the condiments won’t get lost in a bun. I would like to see other flavor condiments, like a version of a Mexican hot dog or some sort of Asian twist. Chili is something that you don’t see very often and I don’t know why. I think that makes sense at any sports game. This reminds me of what those 7-11 rollers could be.
Source

Garden Salad in a Jar (chicken option available)
$8 or $10
Fresh spring greens mix, cheese, tomatoes, carrot, cucumber in a jar with ranch dressing.
Ignore
Ignoring the chicken option, this is a disservice to the vegetarian and vegan communities. Why can’t there be at least a vegan meat option? They have the Impossible burger, just crumble it up. Jar salads are lazy and not that relevant anymore. I also would want to see either a vegan dressing option or just something else besides ranch. I’m not paying $8 for a side salad. The dressing amount looks very low and the chicken looks dry. If the stadium is going to insist on this jar salad, could there be more options? Caesar, Asian, Italian? You can bring a soft-sided cooler into the stadium so I don’t know why I would pay for this.
Source

French Onion Fries
$11.25
Swiss cheese and onions and served with a zip sauce.
Ignore
I’m not convinced these fries are thick enough to keep the onion on there. The picture looks small and what is $11 dollars covering? All of the ingredients are low cost unless it is the sauce? I’m bored with this. I want to see some sort of protein for $11. What if the dip was more influenced by the actual soup part? Almost like a gravy texture with the flavor of onion. Personally, I would like to see more creativity.
Source 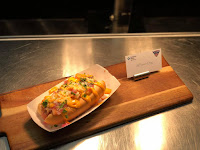 Al Pastor Hot Dog
$7.50
Natural-casing hot dog with pulled pork, pineapple relish, sriracha aioli and cotija cheese.
Order
I have never had al pastor but this honestly just looks good. I think it’s an interesting mix of ingredients I already like. Hopefully, the pork won’t be too dry but there are enough condiments to help if needed. I like seeing spicy sauces and different cheeses. There looks to be a good balance of sweet and savory.
Picture Source
Source 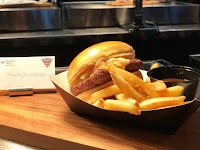 French Onion Burger
$13
Swiss cheese, caramelized onions, zip sauce on the side with French fries.
Ignore
This just looks so dry! The bun looks more substantial than the patty. From what I can see, the sauce looks thin so the bread would probably absorb it. If the burger looked better in person I would ask for mayo or something else. I also do not think that patty is $13 worthy. This looks like an old Wendy’s burger.
Source