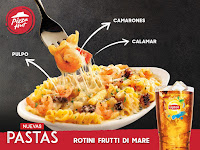 Pizza Hut El Salvador Rotini Frutti di Mare
shrimp, octopus, and squid accompanied by chopped parsley and Alfredo sauce of seafood.
$ 4.99
Order
I am a fan of seafood pasta so why not try it? I’m not sure if octopus tastes much different than squid but pasta is a safe way to try new foods. It’s also a good deal for a portion of pasta with three different types of seafood. If you got this in a sit-down restaurant it would cost over $20. I would also try these ingredients on a pizza.
Source

KFC New Zealand Double Down in new flavors
Zinger Chipotle Double Down - Chipotle Mayo, bacon, two slices of cheese and jalapeno slices served between two Zinger chicken filets.
Bacon Lovers Hash Double Down consists of Baconnaise, double bacon, two slices of cheese, and a hash brown between two Original Recipe chicken filets.
Price Unknown
Order
I enjoyed the original version when it was in the states, but these new ones would make me get it more often. I’m particularly interested in the spicy version. The basic one is a bit too salty and basic. The different levels of heat add more interest. The spicy chicken would also be new for me. The bacon version also looks good. I wonder if you can taste the bacon in the mayo with all the other bacon as well. I think the zinger chicken with the bacon flavor would be even better.
Source

KFC Mexico Hot Cruji Adobado Chicken
3 Dry Chilies with a Citrus Touch from orange and lemon
Price Varies
Order
This chicken is so red and will probably hurt my stomach but I would buy it. I really enjoy spicy chicken but I have never had it with citrus flavors. The US needs more spicy chicken options. If nothing else, give us more heat. I would like a dipping sauce option as well.
Picture Source
Source

Burger King Sweden Truffle Chicken Sandwich
Truffle mayo, roasted onions, cheese and lettuce
Price Unknown
Order
Truffle can be a polarizing ingredient but in mayo it usually is good. I also really like those roasted onions. Any type of onion that is cooked or fried always adds a better element to a sandwich. This also comes with beef. I haven’t had burger king in years so I’m not sure what the beef quality is, so I would just get chicken.
Source

McDonalds UK Nacho Cheese Wedge
A blend of nacho cheese and jalapeños in a crunchy coating, served in a portion of 5 with sour cream & chive dip.
Price Unknown
Order
This looks like a better version of the Doritos Loaded. It’s like a spicy mozzarella stick which I’m kind of surprised no one has created yet. Depending on the price and how thick these are, they should be a good snack. I always appreciate a dipping sauce and this one makes sense.
Source