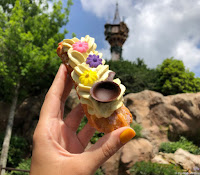 Rapunzel Eclair from Disney World
White chocolate whipped cream topping, dulce de leche filling.
$6.00
Order
I’m mainly interested in the white chocolate cream. Plus, it’s very pretty to look at and it’s a good value for an amusement park. The Dulce de leche filling sounds really good and something completely different from the usual way this is made. I like that the décor on top isn’t plastic.
Source

Fillows Cereal
Cream filled cereal nuggets
Price Varies
Order
I’ve never had cereal with a filling but it makes sense to me. People dip Oreos in milk, so a crunchy layer with filling should be good in milk too. Both of these flavors look good. I’d probably go for the chocolate first but I’d probably try both. Cereal has been super boring for years but I would at least look at these and try some.
Source

Drumstick Cereal
Ice cream based cereal
Price varies
Order
The vanilla one looks the best here. I do not want minty milk. Not even a hint of mint. This is at least a fun idea for a new cereal, how many more flavors do cheerios really need? The different pieces keep things interesting as well.
Source 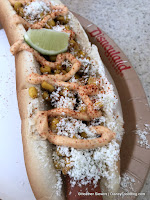 Elote Hot Dog from Disney Land
street corn with chipotle mayo, cojita cheese, chili powder, and a lime wedge. Served with chips
$11
Order
Still, haven’t tried elote yet but I would order this. Good value and involves mayo and cheese which I enjoy quite a bit. I like the option of adding extra lime. It even comes with chips so it would make an easy to eat lunch. I like seeing basic foods be changed up a bit.

Long John Silvers Grilled Choices
Pick a base (tacos, bowl or plate), protein and flavor
Price Varies
Order
I have not been there in many years because I didn’t realize how close they were. I like the idea of being able to customize your meal, especially the flavor. I'd get the tacos or the plate probably so I can get sides as well. Grilled options are good to have for customers who don’t want anything fried. The sodium may be kind of high but at least they’re offering alternatives.
Source