Turkey Hill Blackberry Lemonade
Price Varies
Order
I like lemonade with other fruit so this is something I would buy without much thought. Also makes a great mixer for spiked lemonades. This just takes out a step for me. I’d like to see more fruits with lemonade such as pomegranate, mixed berry, blood orange, etc.
Source

Popeyes New Chicken Sandwiches
Spicy or Original
$3.99
Order
How has Popeyes gone this long without more sandwiches? I know they have po boys but I haven’t heard much about them. Both of them looks good, the spice is added into the mayo. I would like spicy chicken and spicy mayo. Maybe one day they’ll come out with a biscuit sandwich that would be amazing.
Source 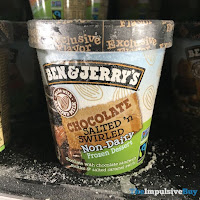 Ben and Jerry’s Non-Dairy Chocolate Salted and Swirled
Chocolate with chocolate sandwich cookies and a salted caramel swirl
Price Varies
Order
I have never tried non-dairy ice cream but I fully trust Ben and Jerrys. The flavor is right up my alley. It is very similar to midnight therapy which I now want to have caramel with it now. I do think non-dairy ice creams are a bit more expensive but I would just wait for a sale.
Source

Mega Stuffed Oreo Cereal
$3.98 at Walmart
Oreo o’s with marshmallows
Order
Oreo O’s are in my top 5 of cereals. I usually don’t care for marshmallows but it makes sense here. Chocolate cereal goes better with them than fruit cereals in my opinion. I don’t know if I’m paying $4.00 for cereal but maybe it will go on sale or something. I’d like to see other oreo spinoffs as well.
Source

Disney World Rum Infused Dole Whip (The King’s Cooler)
Pineapple Dole Whip with rum and is topped with red syrup made up of watermelon and coconut.
Price Unknown
Order
This just sounds so good. I'd order this as a drink as well. There is a non-alcoholic version as well but with the rum, it just sounds so refreshing. I don’t expect the watermelon flavor to be particularly strong but honestly, I don’t need the syrup, it’s just extra. Hopefully, the rum is strong because nothing is more depressing than a weak drink.
Source