Pittsburg Cone
Kielbasa, pierogi, Swiss cheese, sauerkraut, Russian dressing in a waffle cone
Price Unknown
Order
I don’t know if I’m supposed to eat this out of the cone or get a fork but this looks great. I like all of the ingredients and I think they work well in this combination. It’s like a Rueben but with sausage and pierogi. I think I’d use a fork but the cone makes it easy to manage. It’s not like it would melt.
Source 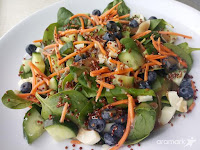 Quinoa Blueberry Salad
Red quinoa, chopped hearts of palm, spinach, blueberries, cucumbers, carrots, sunflower seeds and balsamic dressing
Price Unknown
Ignore
This is a good vegan option to have that isn’t just lettuce. There’s enough texture going on and should be enough for a lighter meal. I just wouldn’t order this because I don’t find the mixture appealing. There isn’t a lot of quinoa here but I don’t like it cold. Blueberries and carrots don’t make sense to me and I really don’t like balsamic. This is a step in the right direction for having more options for different diets.
Source
Picture Source

Cinnamon Chipotle Loaded Totchos
Tater tots covered with cinnamon spiced pulled pork, grilled red onions, green onions topped with a chipotle maple syrup glaze.
Price Unknown
Ignore
This would make way more sense if it was sweet potato tots or fries inside. Regular potato doesn’t go with these flavors. The chipotle probably wouldn’t make much of a difference. The cinnamon and maple syrup take this in a direction I am not interested in. I also don’t want red onions and syrup together.
Source