Kraft Salad Frosting
Ranch dressing in a squeezable pouch
Price Varies
Ignore
Since when has it been hard to give kids ranch dressing? I thought that’s how kids ate raw veggies in the first place? Is this like extra think ranch? This reminds me of the colored ketchup that we had in the early 2000’s. But that was more fun than this. I also think to lie to kids about food will backfire eventually. I think this is trying too hard. Why not release new flavors or a new bottle shape?
Source

Coldstone Edible Cookie Dough
Price Varies
Order
I am a huge fan of edible cookie dough so this should be good. I’m interested in seeing the full line up when it is out of development. So far, the only flavors are Dough for it and Somewhere over the raindough.  I really hope an extra chocolate flavor is released; I haven’t seen a lot of that.
Source 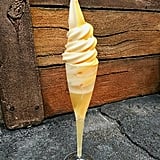 Disney World “Fomosa”
Dole whip served over sparkling apple cider
$6
Order
This sounds really good. I’m a fan of sparkling cider, alcoholic or not. The price is fair, probably easy enough to drink. I’d like to see other sparkling ciders as well and an alcoholic version as well. This would be a cool idea at a bridal shower or something if they ever sold dole whip in stores. It’s a fun treat that kids can feel fancy drinking.
Source

Biscoff Ice Cream
Original, Chocolate Brownie, Salted Caramel, Belgian Chocolate Chip, and Blueberry Cheesecake
Price Varies
Order
I have never had cookie butter because I don’t know what to put it on, and the craze has died down and I forgot about it. It is supposed to be cookie pieces plus the cookie butter swirled in. I would try the salted caramel and the brownie first.  I think this a good amount of flavors to start with.
Source

Nutter Butter Latte
Coffee blended with nutter butter filling
Price Varies
Ignore
I don’t want fake peanut butter flavor. It’s cool for people that have nut allergies but I can’t imagine fake peanut butter being tasty. Why not just use an alternative butter? I also don’t think peanut butter needs to go with coffee. I would have to mix it with something else.
Source