Starbucks UK Strawberry Doughnut Frappuccino
blend of donut crumbles, milk and ice all layered on top of a strawberry puree and finished with whipped cream and a freeze-dried strawberry topping
Price varies
Order
This is the update that the original strawberry Frappuccino needs. Just plain strawberry doesn’t have enough flavor. I would prefer yeast based over the cake but since it’s blended, it probably won't matter much. I would like to see some sort of glaze mixed in as well to really accent the doughnut. I have never had freeze-dried strawberries but it is an interesting touch.
Source 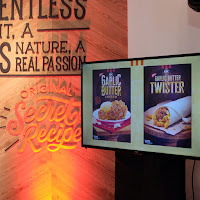 Price Unknown
Order
There should be more sauce with fried chicken. KFC original recipe skin can be a little soggy so I would like some sauce added. At least with added garlic butter, I wouldn’t expect it to be super crispy. This could easily be brought over to America. At least give us some sauce options if we can't get the extra spicy stuff
Source
Picture Source

KFC Philippines Chacho
Taco shell made out of the breaded chicken with lettuce, corn, taco mayo, salsa, and cheese
Price Unknown
Order
This is similar to the double down but with less me and more of a tex-mex feel. A good lower carb option that is less filling than the double down. I like the idea of a chicken shell. I can easily see this working in America. If burger king can sell tacos, taco bell and or KFC could have a chicken shell.
Picture Source
Source 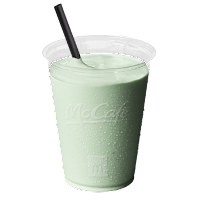 McDonalds Sumoi Pearl Shake
Pear pie milkshake
Price unknown
Order
I have never had pear pie or pear in a shake so it would be interesting to see how strong the flavors come out in this shake. I hope there is some real fruit in here. I can’t imagine fake pear flavor being any good. It would be cool if there was pie crust in this as well.
Source

McDonalds Singapore McMuffin Stack
chicken sausage patties, crispy chicken bacon strips, egg done sunny-side up, and melted cheddar cheese — all stacked between our signature toasted whole-grain muffins.
Price Unknown
Ignore
There is not nearly enough flavor here. Chicken sausage is the least flavorful of the meat-based sausages. I have never had chicken bacon but it seems to be overkill here. I do appreciate the cheddar cheese but I need a sauce or another item that will make this stand out.
Source