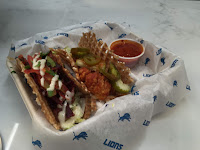 Ford Field’s Duo Tacos
peppered bacon BLT with maple aioli or Nashville hot chicken with pickle relish and peppers with a side of honey hot sauce. Both include a homemade waffle shell.
$12.50
Order
The waffle shell makes sense for both of these flavors. I have never tried maple aioli but it makes sense with the bacon. I like seeing sandwich ingredients translated into different formats. I don’t like the idea of adding spicy honey to the BLT taco because I don’t need honey and maple involved in the same taco. The price does seem a touch high but it is a stadium.
Source 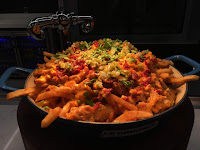 Ford Field’s Nashville Hot Chicken loaded French Fry
shredded chicken marinated in Nashville hot chicken sauce, queso and applewood smoked bacon, green onions, and a pickled jalapeno relish
$13
Order
I am very late to the Nashville hot chicken craze but I like the idea of a different type of cheese fry. I have never had this flavor profile so I’m not sure how well queso would work but there are enough different flavors that would keep this interesting to eat. I would like to see some sort of melted cheese like a Colby jack but queso is probably easier to manage. Hopefully, the ingredients are portioned properly so it won’t be one big soggy mess
Source 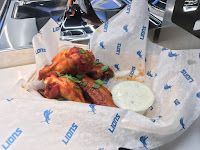 Ford Field’s Smoked Chicken Wings
Crown Royal barbecue sauce, buffalo sauce or Cajun lime dry seasoning. Served with a choice ranch or bleu cheese and whiskey barrel chips.
1lb for $14
Order
It’s really hard to find smoked wings. If I could I’d only eat smoked or fried chicken. All of the flavor combinations sound good but there needs to be a plain version as well. Id pick the Cajun lime first because the only other place I know where I can find that flavor or close to it is Hard Times. I’m cool with the price and the side.
Source

Century Link Field’s Chicken Biscuit
Fried chicken tenders on a biscuit with country gravy
Price Unknown
Order
The gravy is too hard to ignore. Also, I don’t eat a lot of fast food breakfast so I don’t know where I could get a chicken biscuit after 11am. Gravy is underrepresented, especially a good country gravy. There is no price and its hard to tell how big it is but I would try it. Biscuit sandwiches need more sauce options.
Source

Century Link Field’s Seattle Cheesesteak
Shaved beef on a fresh hoagie with herbed cream cheese and grilled peppers and onions
Price Unknown
Ignore
There are not enough different flavors to make cream cheese work here. Cream cheese is too mild for this. You need something with more personality. I either need more herbs than just in the cream cheese. This just sounds really boring and a missed opportunity to switch things up.
Source