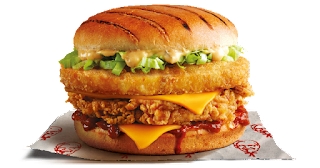 KFC France Southern Tower
A grilled bun, Cajun & Jambalaya sauces, salad, hash brown, cheddar, Zinger filet
Price Unknown
Order
The sauces caught my attention. I have never had a jambalaya sauce. It would be interesting to see what flavors would be highlighted in that type of sauce. Do you go more peppers and seasoning or highlight potential proteins such as chicken and seafood? Also, how is there going to be a difference between that sauce and the Cajun sauce? The grilled bun doesn’t seem needed to me but maybe because both of the sauces and other items could make something soggy? I have never seen grill marks like that on a bun but I would still try it. I’m surprised the US franchise hasn’t done more with chicken sandwiches, especially during these chicken sandwich wars.
Source 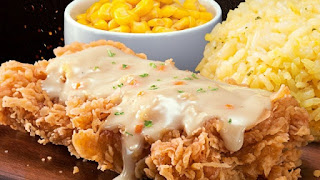 KFC Philippines Chicken Ala King
Zinger fillet drenched in Ala King sauce, with Chicken Butter Rice, Buttered Corn and Regular drink
₱125.00
Order
I have no idea how traditional this is but I love a sauce, especially with fried foods. Rice is a side dish you don’t see often at fast food locations so it’s a nice change to see. Really don’t care about the corn. I would try to get something else. Corn is such a throwaway unless it’s elote. I like that it is a full meal, not just a random side to order. More of a lunch, but still.
Source 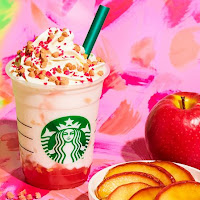 Starbucks Japan Baked Apple Pink Frappuccino
pink apple compote, cinnamon, finished with colorful apple-flavored candy.
¥ 580 Tall
Order
I think the base is vanilla, hard to tell. Apple drinks are really uncommon which is weird because it’s such a popular fruit for kids and adults. I like the idea of different fruits being involved in drinks and desserts. It’s always some sort of berry and the strawberry frappe is overrated. Not enough fruit flavor at all. Personally, I would like to see some pie dough or something but this still looks interesting.
Source 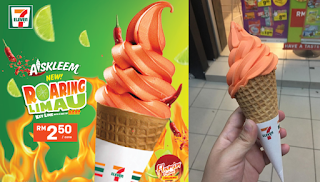 7-Eleven Malaysia Roaring Limau Ice Cream Cone
Key lime and spice
RM 2.50
Order
Citrus and spice go excellent together. I’m the type that adds chili powder and lime to fruit such as mango and pineapple. I don’t care for cones but the price seems cheap enough that I can ignore that. This just seems like an easy yes for me. Spice makes sense with lime and it gives a good alternative to just vanilla or chocolate.
Source 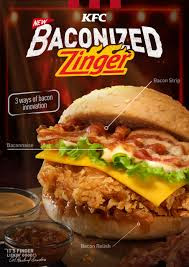 KFC Philippines Baconized Zinger
Cheese, three types of bacon, baconaise, bbq bacon relish
Price Unknown
Order
The three types of bacon aren’t mentioned but bacon is my favorite form of pork besides prosciutto. This reminds me of the Grand Bacon Extreme burger from McDonald’s with more condiments. This is a fun, tasty looking sandwich that I would try. Fast food should have kinda ridiculous options like this.
Source