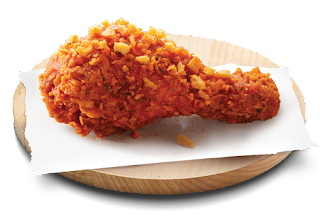 KFC Singapore Spicy Thai Crunch Chicken
Hot & Crispy chicken glazed with a specially concocted Spicy Thai Sauce and topped with crunchy zesty and bits.
Price Unknown
Order
Current readers already know why I want this but, Thai spiced is a newer seasoning I haven’t noticed. I will not rest until American’s get better fast food options. We should be able to get at least more spicy items. I’m not super familiar with Thai flavors but this actually looks like it would be crispy. Why can’t we get the spicier chicken? Can we at least get this super crunch version? KFC in the US is known for its soggy skin unless it’s wings. I also noticed they brought back the fried chicken skin which I also think would do well in America. If Dunkin can sell bacon alone, we can get some crispy skin.
Source 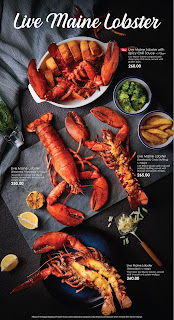 Red Lobster Malaysia Live Main Lobster with Spicy Chili Sauce
Served with golden buns
260.00
Order
This reminds me of fancy make your own lobster roll. I actually have never ordered a lobster from Red Lobster but this could convince me otherwise. I like seeing something different than the basic steaming. I’m not sure what type of bread that is but it looks so thick and soft. I think I would ask for butter too just to balance the flavor. The American branch could do something similar. If we can have the dragon sauce flavor, we could handle something like this. Again, we need more spicy flavors in the chain restaurants!
Source 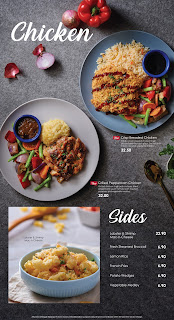 Red Lobster Malaysia Crisp Breaded Chicken
Potato crusted thigh with hot chili glaze. Served with lemon rice and vegetable medley
32.50
Order
Why can’t we have this? Red lobster needs more chicken options besides pasta and whatever else they might have. I have seen potato crusted fish before, not chicken though. It’s a good idea. Also, this lemon rice looks so much better than that wild pilaf that the USA gets. It also makes more sense with seafood. The vegetables don’t look that interesting though, I’d maybe get something else
Source 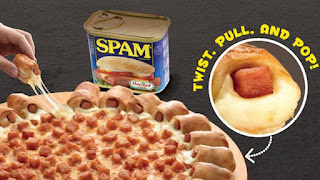 Pizza Hut Singapore Cheesy Spam Bites Pizza
Cheese pizza topped with cubes of Spam and surrounded by a crust of pull away bites that are stuffed with mozzarella cheese and even more cubes of Spam.
Price: P419
Order
I actually like spam if it's fried, I don’t care that it is borderline too salty and isn’t the healthiest thing to eat often. I don’t buy it much but I would get this pizza. Pepperoni is boring and overrated. At least with spam, there is more pork flavor and texture. The stuffed bites are just a bonus here with cheese and even more spam. America got the hot dog version but I don’t remember if there was cheese in the crust. The only potential issue I could see is if it's too salty but it’s a risk I’m willing to take. I want American franchises of pizza hut to have more options but I know the last time they tried to introduce new stuff it didn’t go well. However, I like the crust flavorings they offered.
Source