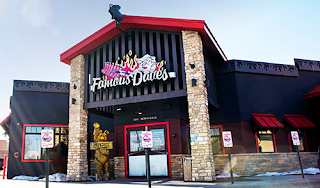 I want to eat at more BBQ restaurants. It just isn’t talked about enough. Today, I am going to discuss a few items that I would order from Famous Dave’s.

Dave's Sampler Platter
Southside Rib Tips, Chicken Strips, Sweetwater Catfish Fingers, Onion Strings, and Wings tossed in your choice of sauce. No subs
$16.49
I used to order appetizer platters as meals when I was younger and still will today if I can’t make a choice. All of these items I would eat individually. I don’t have a lot of catfish so that is a standout for me. There is a lack of dipping sauce options and I hope they have more than just bbq sauce. If I’m getting bbq wings, I want something else for the fried items. Also, why aren’t onion strings more popular? Way more fun to eat over just the rings. Appetizer platters are a good way to get a feel for a restaurant.

Smoked Salmon Spread
Hickory-Smoked Salmon, cream cheese, capers, and chipotle peppers, served with fire-grilled pita bread.
$8.99
I was very pleasantly surprised to see this pop up on the menu. I don’t see smoked salmon nearly enough on menus. I’m a salmon fan overall but smoked salmon is a personal delicacy for me. The added spice to this spread is a new twist I haven’t seen. The grilled pita doesn’t do much for me but an interesting touch none the less

2 Meat Combo- My picks
Fried chicken (served with Buffalo Honey sauce), hot links, potato salad (Potatoes with red onion, celery, egg, mayonnaise and a hint of mustard), grilled pineapple steaks (Two big, juicy slices grilled and seasoned with cayenne and raw cane sugar)
$16.99
I can not ignore fried chicken. I know I could reasonably cook this myself and I will for the right people but it’s a lot of work. Buffalo honey is something I have not tried before but it makes sense. Sweet and spicy mix. I like sausage a lot so easy choice there. I don’t eat potato salad a lot and I prefer a mayo base. I didn’t pick the mac n cheese because it has corn in it. It doesn’t make sense. Just give me more cheese. I would pick the pineapple because I actually like grilled fruit and I like that it has some spice.

Dave's Award-Winning Bread Pudding
scratch-made bread pudding, topped with pecan praline sauce, served with vanilla ice cream and whipped cream.
$6.69
I rarely order dessert and I would like to change that. I only tend to see bread puddings at cheaper buffets. If I’m at a buffet I’m getting the premium proteins. The sauce on this is what really has my attention. The ice cream isn’t needed, at least I don’t think? Isn’t bread pudding already moist and there is already sauce involved? Also, it is the most interesting dessert on the menu by far.