If I do more of these, I’ll come up with a fun name. Vintage recipes have been a quarantine interest that I’ve started to explore. Even books from 10 years ago are such a time warp. This book is from the ’60s and I was fully entertained the whole time. The recipes I am going to discuss are what caught my eye for the better or worse 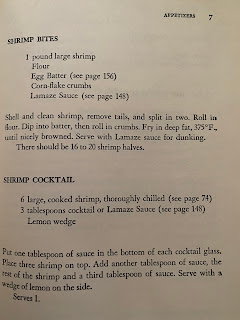 This may be unpopular but I don’t want corn flakes for anything. Not to eat for cereal and especially not used for a coating. I can’t stand the texture at all. It is the worst option. When did breadcrumbs become a thing? I was surprised it was an option in a lot of the recipes. I also think cutting them in halves is too much work. Shrimp cooks pretty quickly anyway. 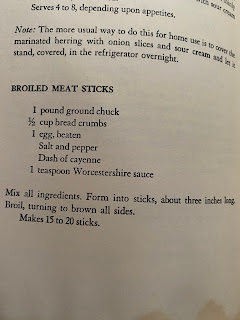 This needs more than just salt and pepper. Red meat needs more than that. I feel like most savory recipes benefit from garlic, onion, and paprika as well. The lack of seasoning astounded me, especially for a recipe cookbook. Also, I think meatloaf would be easier than doing this. I don’t think the breadcrumbs add anything in this format. 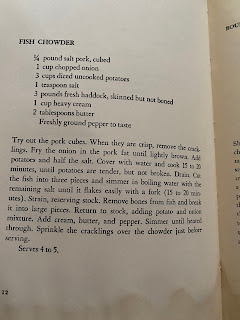 I actually kinda want to try this. I don’t care for soup much but I love cream-based stews and I think this could be easily updated. I need to look up what salt pork is though. I’m aware of smoked pork necks for greens but I wonder if there is a difference. This just needs more seasonings like paprika, maybe some cumin, seasoned salt, etc. I’m not sure if I want to deal with deboning fish though. I also would replace the water with fish stock or pork stock if that is a thing. I just don’t enjoy cooking anything in the water, I feel like you’re missing an opportunity for more flavor. 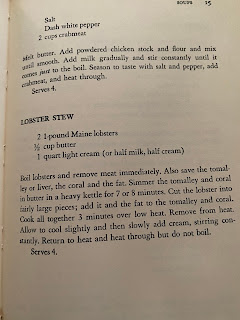 Where are the seasonings? Not even salt? I can't imagine eating such bland food from a restaurant. Adding the guts is not enough flavor. I like the idea though. I’d add more seasoning and other fish though. Lobster isn’t strong enough for such a lack of flavor. Buying two whole lobsters seems a bit pricey for this too. This must have been when lobster was cheap. 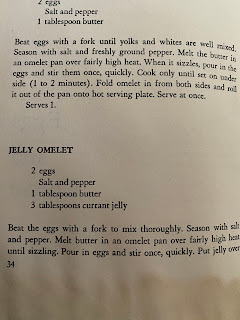 I could never. Jelly isn’t my favorite thing but in eggs? I need my eggs to be savory all the time. Don’t add a pinch of sugar. It's not even a savory jelly. Grape?? Absolutely not. I would rather eat eggs unseasoned then with sugar. I was completely taken off guard with this recipe. Also, not crazy about omelets. Rather have them over easy, a skillet, scrambled easy, poached anything else. Omelets tend to be so overcooked. 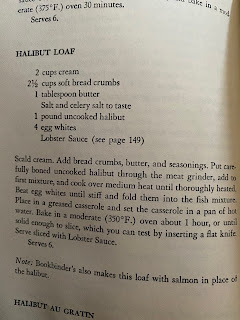 This recipe perplexes me. I like the idea of this but at the same time, I don’t like the idea of fish being blended for a seafood meatloaf. Maybe a souffle version would make me fully commit. I like the idea of a baked fish with a seafood sauce but making minced fish for a large ass fish loaf is kinda unsettling. I actually think the salmon version might be a bit better but I might create this one day because it is so perplexing to me. I also wonder what makes the soft bread crumbs soft. Celery salt is something I haven’t seen before. Celery is one of my least favorite seasonings so I don’t know if I would add that. This is another recipe that I think is severely lacking in seasoning. 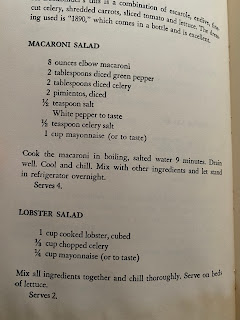 Are yall telling me I can mix anything with mayo and it’s a salad? I already add too much cheese to regular salads. This is just giving me more ideas. I think I would make this though because I want to know what a lobster roll tastes like but I’m too cheap to buy one. This just needs lemon over celery and then again, more seasoning, and maybe add another seafood as well. Salt, pepper, and garlic should be the default. 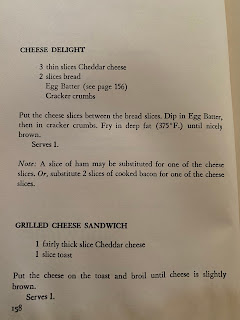 Deep-fried cheese sandwich? Sign me up today. I would eat bread for this. Just add more cheese and seasoning and I would make this. This would be a great upgrade for tomato soup as well. I love fried foods. Fried sandwiches is an interesting subject that I wouldn’t mind exploring. This would be a good introduction to wild fair foods. 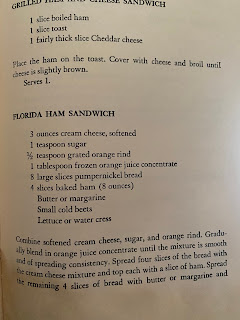 This just offended my senses. Adding citrus to something makes it from Florida? Orange does not make sense to me here at all, especially competing with the strong flavors of pumpernickel bread. And they had the audacity to add sugar to this as well? This is my least favorite recipe. The cold beets don’t make sense to me either. I just think this doesn’t make sense for a sandwich.